This week’s post is brought to you by the letters: HOLE. E. FRICK.

You know those adventures where you deliberately tell your parents after the fact so you don’t get a ear-full of stuff you don’t care about? Boy do I have a tale for you.

Let’s start from the beginning.

One of my goals for the project #BreakTheRules was to immerse myself in an off-beat religion, particularly one of the dark variety. Ouija boards, tarot cards, rye breads, all are WILDLY fascinating. I have heard friends tell absolutely insane stories of sneaking into the ‘Demon Church’ of Cincinnati. It blew my brains out to think that a commune of reclusive folk resides on a private drive in Milford where unspeakable and insanely private ceremonies take place. I needed to be a part of it. After tons of research and everyone in my life telling me I was completely insane… I figured meeting with a coven of real-life, practicing witches in Cincinnati was the next best thing. Despite the compromise, you better believe I wasn’t going to do this alone. 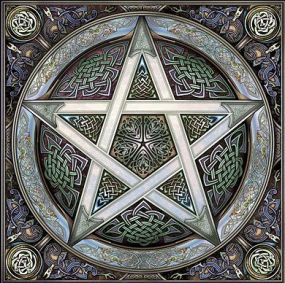 Jeff Stagnaro and I spent approximately 10 minutes apart last week. Somehow the two of us were able fit both a Pagan festival and an Evangelical Christian weekend  conference into one week. Believe it or not there are equally weird stories about both events. Jeffrey’s ‘lean-with-it-rock-with-it personality’ and ‘down-for-whatever’ spirit makes him the perfect companion for dancing to a hip-hop beat, aquatic sports, spotting Chris Bauer, enjoying a Belvita Breakfast Biscuit, playing jacks on the black top, and HUNTING WITCHES. There’s safety in numbers and guns. We didn’t have guns be we sure had NUMBERS.

The coven we visited is a small group, but not as small as that you might think, of Pagans that meets in Bethal, Ohio. If you are unfamiliar with Bethal, Ohio it is a vaguely terrifying, small, overweight, farm town with a heroine problem that’s about an hour and a half from Oxford. About 40 witches/Pagans meet once or twice a month in someone’s home, outside in a park, or at Rincon Mexicano for “Margarita Monday”. This meeting was for the festival of Imbolc, the festival of spring celebrating women in particular, and was hosted Diane’s house. Diane’s house had all the witch stereotypes… aka had an oven and is a place where no one could hear us scream.

Don’t worry, we took ALL of the necessary precautions before immersing ourselves in witch culture. 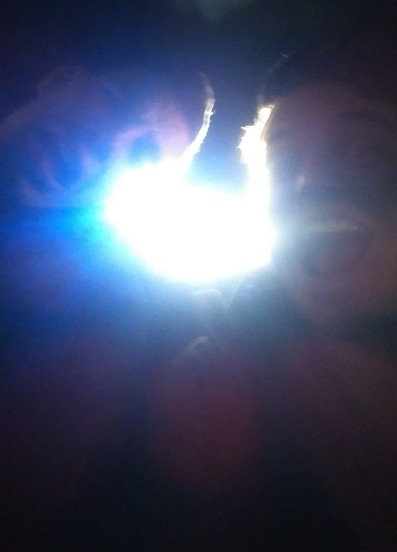 I had every intention of attending the Wiccan festival of Imbloc and immediately  running back to computer and blasting them for their OUTRAGEOUS beliefs and customs. It turns out Wiccans are incredibly misunderstood and are bizarrely welcoming to two idiots weaving a web of lies to get a juicy story out of it.

After saying a quick prayer and timidly entering Diane’s house we were stunned to see a house PACKED with PAGANS. We were greeted by the Wiccan couple who would be performing the ceremony that evening. Trish, the head witch , floated over to in a long black gown and striking necklace with a pentagram on it. It was pretty much everything you would expect a witch to be wearing besides a hat sharpened to a point and a broom swinging between her legs. More bad word choice. The couple made us feel at home immediately. I explained, without being asked because I was in ONE hot fuss, that we were there to “check things outs.” “We’re not sure what we believe,” I pleaded. Trish assured us that we were welcome to abstain from any part of the ceremony that made us uncomfortable. We weren’t expecting that. So far so good. 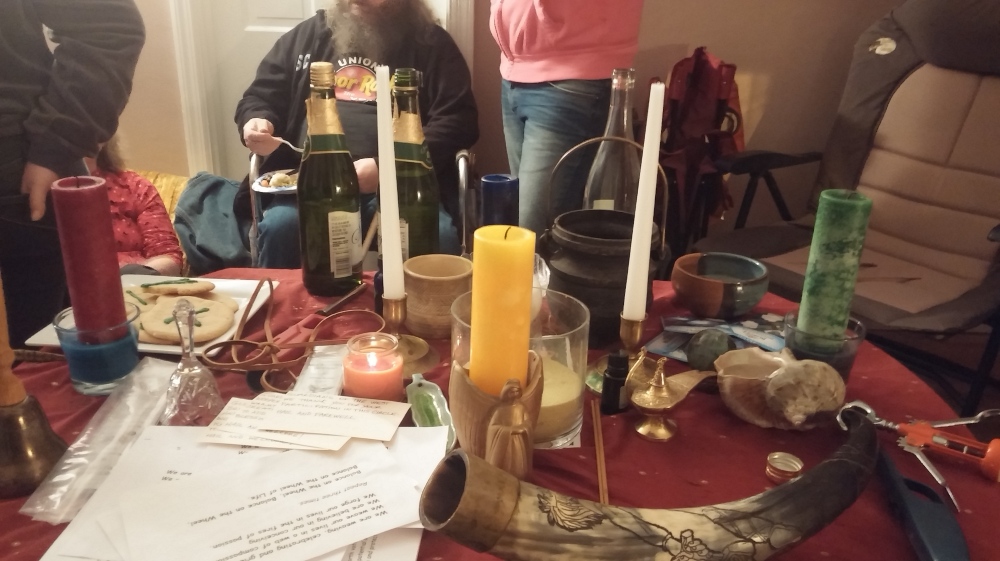 ^^ The part of the ceremony that made us uncomfortable. Pretty much all of it.

I like to think witches are like tea bags, you never know what they’re going to do until you put them in hot water.

I have no idea what that means.

Jeffrey and I had the delight of meandering through Diane’s house before dumping our coats on her bed. Her room was tiny, littered with crystals and feathers, had a huge tiger blanket draping from the ceiling, and imprisoned two demon dogs that hid under her bed and would bite your ankles if you over-stayed your welcome. I screamed out loud.

The coven then circled us as they forced to strip naked and swing from a chandelier while drizzling us in lamb’s blood.

Diane and Debra did corner us in the hallway and gave us a tiny package.

Debra: I also have honeysuckle with sage.

*Our hands awkwardly & immediately shoot back into her basket to trade* 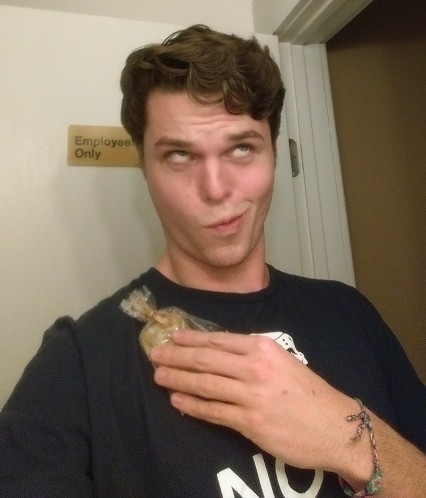 ^^Magic soaps are for employees only.

Diane explained to us how she was raised Catholic but it wasn’t “doing it for her anymore.” She still worships God but needed magic to get the most out of her relationship with him. Interesting. Diane has a painting of the Last Supper on her kitchen wall and a broom on her living room wall. The broom is used for cleansing a space of bad energy before and after a ceremony.

Without much warning the ceremony began. All 40 of us flooded the living room, standing room only. The ceremony started by creating a sphere on energy. We stood in a circle and touched each other in a clockwise, wave fashion for a few minutes. I, like a normal person, touched Jeff’s shoulder when it was my time to pass the energy. The dude to my right, who was like 4 feet tall, had bleached, short hair, and an incredible amount of fake tan, inserted his finger into my belly button when it was his turn. He’s lucky I didn’t break his arm.

^^ Conspicious pic of our environment while I think about smacking blondie on the right.

We welcomed spirits from the north, south, east, and west. “Hail and WELCOME,” everyone would shout. Candles were lit and passages were read to help us focus in on something we could intrapersonally improve for this year. We charged incense with our intentions and were instructed to burn it in private meditation. We also threw a penny in a well for someone who was hurting, and chanted a hymn to the tune of a children’s nursery rhyme, which was super creepy and complete cacophony.

It was now time for witch communion. Remember when we PROMISED each other to not eat or drink anything? They passed around a plate our cookies with miscellaneous Pagan symbols on them to strengthen different personal qualities. I passed the plate of cookies clockwise because eating a Pagan pastry made me uncomfortable. Jeff took the ‘cookie of will’ and immediately jams it in his mouth. WHAT. Did he forget EVERYTHING we talked about? CLEARLY they are trying to fatten us up so they can fry us up for dessert. My competitive side reared it’s ugly, but incredibly handsome and well-groomed head. Shouldn’t I have the CRAZIER experience? Who’s blog is this anyway?? The “Horn of Meade” was then passed around. It pretty much looked like the horn of a demon filled with wine. I GUZZLED that thing. “May you never thirst,” we declared as I passed it to Jeff. THAT SUCKER LET IT PASS. I won the battle but immediately felt like I lost the war. #StillAlive.

The spirits returned to their respective cardinal directions and a feast was had. We helped ourselves to the worst Zuccini bread on the planet. More bad decisions.

We spoke with Ed, Trish and Ben for a long time after the ceremony. Ed is a retired EPA worker who has been a Pagan for “longer than we have been alive.” I hate it when people say that. He was a super nice guy who explained to us in extremely technical terms how to neutralize radioactive waste. Trish and Ben work at a retreat center part-time. They specialized in creating spiritual atmospheres for visiting guests. We wooed our way to becoming great acquaintances fairly quickly. We spoke of Christianity briefly when Ben explained that his absolute best friends is a “Bible-beating Baptist.” He said they decide to celebrate what they have in common rather than focus on their differences. An approach I wish more people would take. As Christians we are called to immerse ourselves in other social groups and cultures to spread the good news and love on each other, not hoard it to ourselves and do 20 hours of bible study community groups a week. Get out there, become an insider, and do something with it. This was one of the best things I learned from the Beyond conference last weekend.

^^ Wingardium leviosa @ Beyond. We learned so much.

Our experience with the Wiccan community was completely surprising. Wiccans are people slightly left-of-center who have looked to the Earth for the answers to their big questions. We asked a woman as we were leaving if she could recommend any reading She said to read whatever feels right, to look inside ourselves for the answers, and to come back next month to teach everyone something. Dr. Suess feels right to me. We had some extremely open, intriguing, and deep conversations with strangers, perhaps that was the most refreshing aspect of our adventure. I wish being confident, upfront, and completley respectful about what you believe and why was a common practice for all. My challenge for you this week is to immerse yourself in a new group of people without giving them the ole hit n’ run. Get to know and love them for who they are and share your beliefs naturally when it’s time. If it does not work out immediately… be like Ben and his Bible Beatin’ Baptist buddy! Let’s be chill and faithful servants, Gucci?