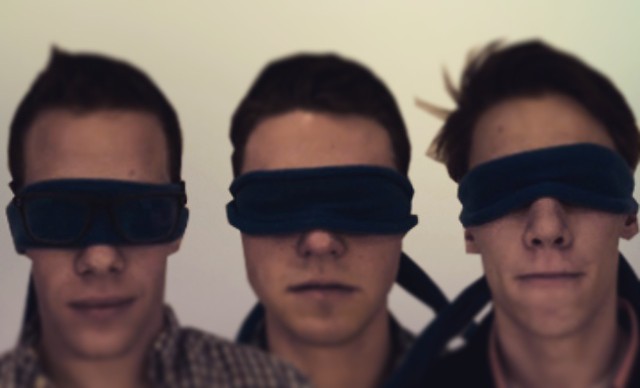 Remember those days when we bolted from the bus as soon as our feet hit the pavement to watch 2 hours of MTV? It was social conformity at its finest, and it was awesome. A Shot at Love with Tila Tequila ruined everyone’s innocence, Next encouraged superficial hookups based on appearance alone, Date My Mom was perfect, I Love New York was complete garbage. It was 2 hours of superficial, staged television that culminated in good ole heavy pet as the credits rolled in.

Dating makes me uncomfortable. I’m also really bad at it. I could probably just go on a date for this blog and call it a day because that’s how outside of my comfort zone it is. My palms sweat, my heart beats like an 808, I verbal diarrhea all over the floor. It’s real bad. Anyone who’s ever dated me (all like three of you… some of you for like 2 minutes) can tell you about an uncomfortable Christian Jaekle experience that they’ve had. My favorite was when I had my “first kiss” at my high school career fair by romantically kissing Miriam Remmers on the FOREHEAD. That’s not a thing. But it is now.

Floating high in the sea of trash television is the brilliant American-adaption of the Dutch hit series, Dating in the Dark. Dating in the Dark is actually an awesome concept. A triple date unfolds in complete darkness, the lights come on, people fall in love and start pounding it like a hashtag because everyone is a supermodel BLAH BLAH BLAH. Since all my best friends are super models and I am a super model it seemed like a perfect thing to recreate. Also WHAT COULD GO WRONG??

The community matchmaker and incredibly helpful Amanda Lawson facilitated the event. Amanda sourced three women, of whom we do not know to complete her “friend’s psychology thesis.” Want to get away with something ridiculous on campus? Tell everyone you’re doing a psychology thesis. You could club a baby seal to the Taliban national anthem without anyone batting an eyelash.

Here’s how the evening was set to function, regard how anal-retentive the whole thing was.

Before I start the recap of the evening, let’s get to know our gentlemen contestants…

Hails from: St. Louis
Age: Freshman
Major: Finance
Fun Fact: Has moved all over the US growing up. Laughs at my jokes, even when they’re terrible.
Signature Style: Being evolved enough to not need sleeves. AKA frequents vests.
Social Ticks: Fools you into thinking he’s older than he is… then says something that reminds you that he’s a freshmen. We LOVE it.
Attractiveness: Supermodel
Dating Experience: Experienced

^^The one in the middle! Just kidding the one on the left… I think.

Hails from: Cincinnati
Age: 22
Major: Economics
Fun Fact: He can file your taxes while doing his squats. AKA is wicked smart and has thunder thighs.
Signature Style: I would also trade closets with him any day. I’ve been stealing increasingly larger and more expensive things to see how long it takes him to notice. Next week is the Rav.
Social Ticks: Jeffrey hates groups of people 4 or greater, pancakes, personal questions, people reaching towards him, texting, and Mattress Firm.
Attractiveness: Supermodel
Dating Experience: When he feels like it.

^^ This is how I picture my own birth.

Without further ado… here is the RAW, DIRTY, UNFILTERED, HIGHLY SEXUAL recap of the evening.

For the one on one time in the world’s smallest apartment we all had to sit like 5 inches away from each other. We came up with this awesome idea where Jeff and I would take all of our clothes off and Bryson would try to put them all on before the lights came on. I don’t know if the girls  would scream louder because Bryson is wearing three Polo shirts of that Jeff and I would be sticking to the couch. I like to think the second option would be more positive screaming fueled by excitement. That never happened, but it should have because that would have been WAAY more interesting. There were three options for one on one time: the couch, beanbag chairs, and a high top table. Jeffrey called the only good option, the bean bags, before I could finish my list of options. I also successfully manipulated Bryson into thinking the couch was an awesome spot. Turn your neck? NOPE. Too lazy. We established the safe word “walrus” as an indicator that one on one time had to end. The perfect set up being, “What’s your favorite animal at the zoo? Mine’s a walrus!”

9:59: *Screaming and running around in circles*

The girls giggled their ways into the room as all three of us slowly peed ourselves, still not quite believing this was actually happening.

Gretta was my designated female and we had a great time awkwardly giggling at each other. She did not help me much is facilitating the conversation, only giving me brief, broken tidbits about her. She studied media and is in a sorority. I told her I studied INTERACTIVE media. “It’s like what you study but it MOVES!” I exclaimed. What. That’s like 4% true. Why did I say that? Bad at dating.

She told me she worked at the Miami TV station. I know exactly no one watches the network but pretended like that was something cool to do. She also studied abroad in London, don’t worry she didn’t see One Direction as soon as she got off the plane, I asked. Still bad at dating.

Amanda clumsily walked back in the room with  a tray of snacks I made her make for us. More manipulation.

One of super spongy short cake ring that could totally absorb all the liquid in your body and kill you.
A handful of strawberries
Coolwhip Lite
Coconut sorbet
…all from your local, neighborhood Walmart!

Jeff, Bryson, and their assigned females clumsily joined Gretta and I at the table. Gretta informed me she was gluten fee and Bryson’s girl told me she was allergic to strawberries.  Jeff’s girl tried to not throw up on Jeff. The introvert presence in the house is overwhelming. WALRUS WALRUS WALRUS.

Community conversation was hilarious and light-spirited. Bryson made a joke about having to epipen his date in the face. That’s my boy. I made jokes about being pulled under the table by a rogue psychology student. I don’t know. Shut up. Jeff and his date stared at each other confused. Perhaps the highlight of the evening was when Bryson’s date asked him if he goes hard in St. Louis for Mardi Gras, she’s ALWAYS wanted to go. St. Louis ≠ New Orleans. We laughed “with her” for like 10 minutes.

Amanda reappears out of no where and we all scream like school girls. We mentally prepare ourselves for the big reveal.

When those lights turned back on it was like getting Lasik for free. 3 seconds of screaming… 2 seconds of blur. I remember shouting, “OH MY GOD YOU LOOK STUNNING!” sarcastically at her and she laughed so hard her head hit the table. I only had like .28 seconds to look at her. She was pretty, I think. Bryson and Jeff also retained almost nothing about what their assigned females looked like. We could pass the three of them on the street and NEVER FIND THEM.

The girls filed upstairs and the boys waited with  bated breath.

Amanda busted back into the room with a handful of letters, the three of us hoping we would get a second chance at love in the light. “They all took the money, but it was REALLY REALLY HARD for them to choose,” she explained. BULL SHAT AMANDA. “Oh and they had a really great time… they want to know if they can come down and say goodbye…?”

You rob me $15 and reject my love and think its cool to have the best of both worlds? YOOOOUUUU GET OUT OF HEEEERRREEE. After having 3 boys yell at her, Amanda retreated back upstairs to tell the girls to leave. “They were really sad,” Amanda ensured us. Super. So were we when they took our money but not our kisses.

Regard our love notes below: 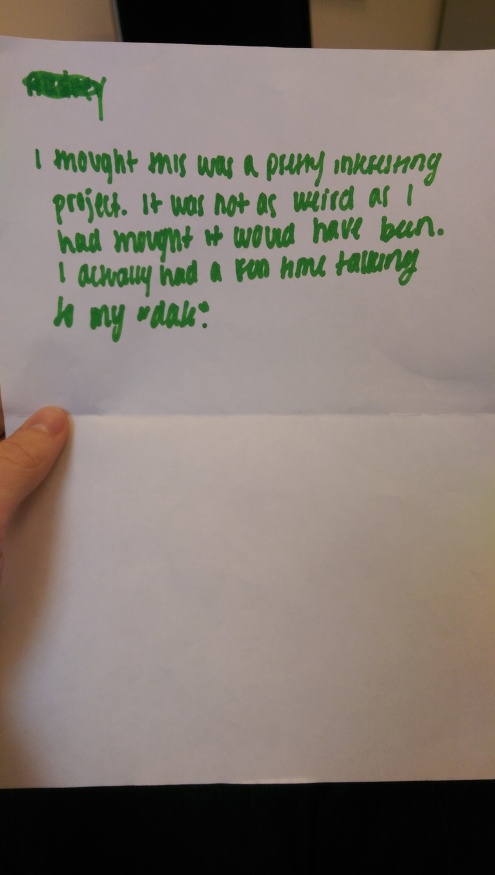 How we feel about it:

^^ Sometimes we just want to be held.

Believe it or not… Amanda got a next message from Gretta saying that Bryson’s girl wishes she took the second date! T She then proceeded to try to add him on Facebook… she didn’t know anything but his first name. She probably had to do some digging. Bryson was kind of creeped out. She’s in friend request purgatory. Story still developing. But I love that it happened. TEACH US YOUR WAYS.

The overall experience was worthwhile and completely hilarious. Taking the looks out of dating makes you have a genuine interest in getting to know someone without making a snap-judgement about their attractiveness. Luckily none of us were hideous to look at. That being said if someone was generally unattractive and I was forced to get to know them in the dark, had a great time, subconsciously or not, I would be more likely to possibly go on a second date with them once I got another round of free Lasik. The three of us guys would totally jump back onto the Dating in the Dark train. It was wild, fun-spirited, awkward, defers self-consciousness, and people say the dumbest stuff. It’s the best of every world. Dating is way to awkward to not take a bunch of risks to get to know someone. We take it waaay too seriously. If someone rejects you, who cares, burn the bridge and move on. I think you’re GREAT, and fist pumps to you for trying. You’re the cool one who took the risk, they’re the one with a closed mind. It’s a free dinner… if I was a girl… I’d want a date every night of the week. Just sayin’.

^^ This video is a complete triumph

Massive shoutout to Bryson for trusting me that this would not be the worst experience of his life and to Jeff for pulling two #BreakTheRules posts in a row. I hope you’re ready to connect 4.