We have been fleeing campus to break the rules for several weeks and it is time to bring the comfort-zone squashing back home. It’s pretty easy to do something outrageous if you know you’re never going to see someone again. IT’S TIME TO BE FREAKS WITHIN OUR COMMUNITY.

After telling everyone and their brother that we were going to wear leggings and big shirts all last week to sympathize with girls… and butt-lookers… we decided that that idea was quite literally the WORST. I went to a nude beach last week and I follow it up with wearing leggings all week? Cozy? Yes. Mildly amusing? Yes. Debaucherously nude? Not with proper compression. #BreakingTheRULES at this point? Not really. WE’VE COME SO FAR.

After racking our brains for an activity this week we decided that bartering people for their hard-earned goods in exchange for a ride in our swag-wagons to class could be WILDLY amusing. It’s like the Yukon Trail but without the cholera!

…and YOU probably thought the creativity was running dry. YOU’RE WRONG.

^^ Some models we picked up on their way to their bikini shoot.

The day started quite literally with a boom, boom POW. If you had a pulse and a face last Wednesday you would know we had one of the craziest thunder storms we’ve ever had here in Oxford. We also HAD to do this on Wednesday. As the end of the semester approaches, Jeff and I’s schedules get tighter and tighter as job interviews and projects pile up. I woke up in an extremely PISSY mood as “The Day After Tomorrow: Live & In Person” unfolded outside.

Lana Kay: How does this rain make you FEEL?

Lana Kay: When I say go, strike a pose about how this rain makes you FEEL.

*Whole class falls to the ground and covers their face*

No one was having it.

After kicking puppies and imposing my negative attitude onto others all morning, God opened up the sky for exactly 2 hours and it became BEAUTIFUL.

After making signs that read, “Uber” and “Rides 4 Barter” we descended down High Street with wagons in hand. Upon passing Apple Tree we stumbled upon head of the Entrepreneurship department, the burly and handsome, BRETT SMITH. I love Brett. The looks on his face was also priceless when we saw us roll up.

Me: Brett, get in my wagon.

Brett: Jaekle, you’re always doing something weird. Can you take me to Apple Tree?

*6 seconds of deafening awkward silence as we decipher for sarcasm*

Did you know campus feels about 100x bigger when you’re dragging a big, stupid object? We were pouring sweat, POURING SWEAT. I wanted to drink water…like… I’VE NEVER SEEN WATER IN MY LIFE.

^^ Although my thirst for water was great… my thirst was adventure was greater.

We rolled up to the front doors of Armstrong with copious swag. We figured the demographic of people who hang there ( FRESHMEN) might still get excited over the little things.

Cajoling students to get in my wagon was quite the challenge. Like stranger to small playground child, students are wired to blow a whistle and run away from us screaming. I’ve never felt more like the village idiot than when I was sitting in the busiest part of campus holding a sign with “Uber” spelled wrong and a child’s locomotive device trying to convince them to let me do them a favor. That Miami University cool kid image, man. It’ll getcha. We found that if we sat on the steps yelling, “RIDES FOR BARTER” or better, “GET IN MY WAGON” people were slightly deterred. If we were chatting it up with a friend who was passing by and people just so happened to notice our unique services. BAM there was a line 3 deep to barter with us because someone cool (all of our friends are super models) stopped to chat, wagon rides became the cool thing to do. Social psychology, it’ll also getcha.

Things Christian Wanted in Exchange for a ride in the ‘Red Rocket”:

Things Jeff Wanted in Exchange for a ride in the “Blue Buggy”:

Needless to say our standards were different. Jeff did say “NO” to someone trying to get a ride in exchange for pocket lint. I’ve never been more proud of him.

After crying 18 millilitres of tears, creating a nice puddle for our soon-to-be guests, we had our first takers:

Megan bartered a bag of Starburst Jellybeans, only the reds , for a ride 30 yards away to Shriver. I only had to beg her. Jeff’s rider bartered him a pencil for a 8 block ride back to his dorm.

A random art student bartered a freshly smelted ring, a project from his metal-working class, for a ride to the art building. Currently saving it for the right gal <3. 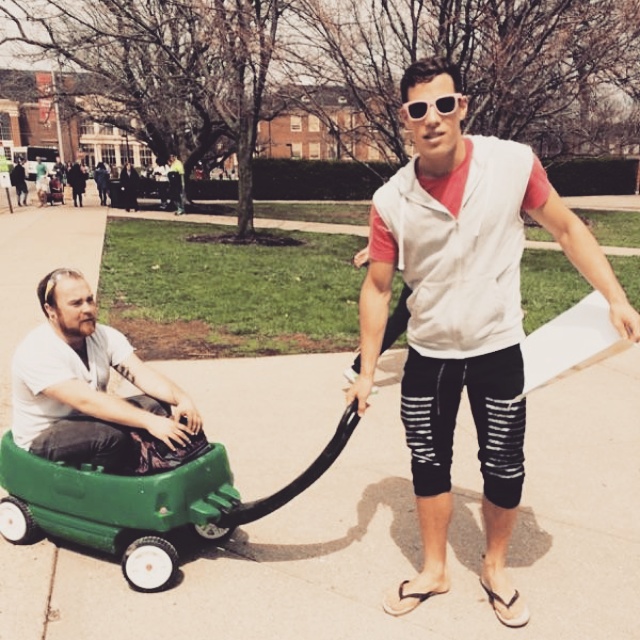 ^^ The ring bearer shoved into a small cage with wheels.

My first Miami friend DANIELLE JANE BERGSTROM bartered a rape whistle and an evangelical instagram post for a ride back to Richard Hall. WE LOVE HER ZOMG.

^^ Just realised I screenshot’d this 8 seconds after she posted it. HAHAHAHA

Two frazzled freshmen girls bartered us a hastily consumed shortbread cookie for a ride to Porter. It was delicious.

A girl I’ve never met before recognized us from the internet but did not want a ride. I still love you.

Two sorority gals got us “SnapChat famous” while enjoying a ride back to their Chevy Malibu.  I know that was an excuse to take pictures of my  @$$. Clever.

Katie Hunt sniped us in some sort of crazy drive-by. 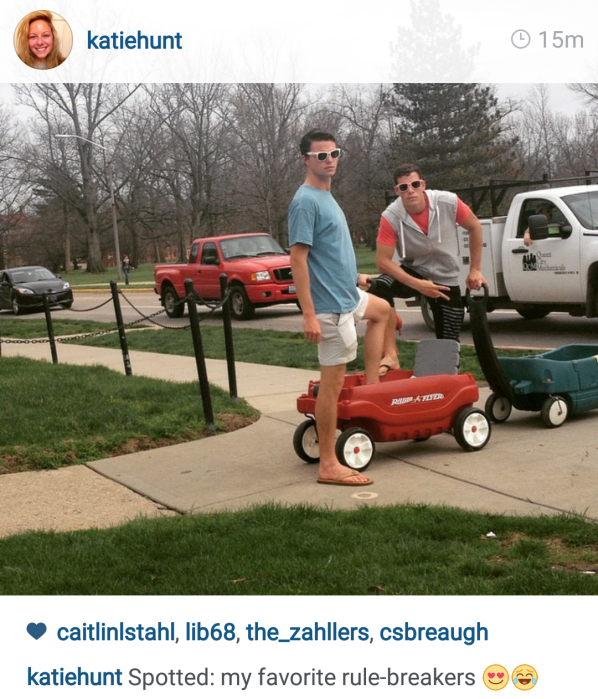 We deterred 6-7 campus tours from ever visiting Miami University again.

Overall our adventure a blast. Was I expecting it to be MORE of a blast? Yes. Getting rejected for almost 3 hours straight is healthy though, it puts calluses on your soul. We made quite a few people’s days, made some new friends, and inconvenienced young families by borrowing their toys at extremely odd hours #college.

We learned a great deal about how  people react when THEY #BreakTheRules. Short answer… most avoid eye contact, run away screaming, laugh in our faces, or take alternate routes to avoid passing us on the sidewalk. We saw MULTIPLE freshmen cross the street for no reason but to cross it again in 100 feet to evade speaking to us. That feels awesome.

However, those who DID take a step outside of their comfort zone ranted and raved about their experience to EVERYONE THEY’VE EVER MET. The amount of  SnapChat action and hootin’/hollarin’ at passerbys was quite hilarious. Like a big brother who does crack, passengers were all about sticking it to people who rejected us.

Moral of the story: Do not be afraid to step outside of your comfort-zone on campus because  you WILL have an AWESOME time with people you may not have met otherwise. Plus you might get a photo of my @$$.